The world consumes 95 million tonnes of aluminum each year, a number that's set to grow by 40% by 2050. Aluminum is prized for its low weight and for its high strength-to-weight ratio. This makes it an important player in the clean energy transition: lighter vehicles are more efficient and key to making electrified transport sustainable.


Aluminum was responsible for 1.1 billion tonnes of carbon dioxide equivalent (CO2e) in 2018, about 4% of global emissions.

This is less than steel and cement (~8% each). However, the world consumes far less aluminum than steel or cement, meaning that, per tonne, aluminum is actually the most carbon-intense of the top 3 highest emitting materials. Around 16 tonnes of CO2e are produced per tonne of aluminum.

That means making a tonne of aluminum emits more carbon than burning 5 tonnes of oil.

The smelting step is the most significant source of aluminum’s emissions by far: 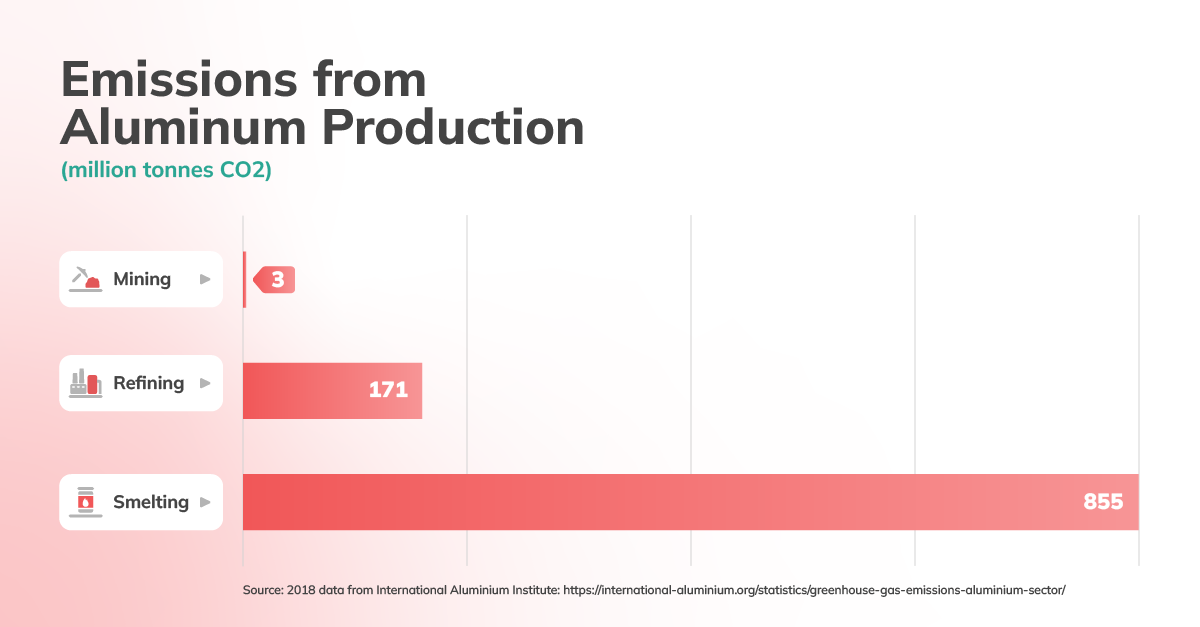 Bauxite is extracted from the earth. It’s a reddish rock, primarily obtained from Australia, China, Brazil, and Guinea. It’s made up of 15-25% aluminum.

Since Bauxite is heavy and relatively low value, it’s typically refined to aluminum oxide, or alumina, in the country of mining. Refineries are usually located on the coast to facilitate easy shipping of alumina to smelters.

Refining uses the Bayer Process, and aluminum oxide (Al2O3) comes out of it.

Refining is moderately carbon intense, contributing 2.6 tonnes of CO2 per tonne of aluminum. Those emissions are largely from the burning of fuels to produce heat: the Bayer Process takes place at 150-200°C (300-390°F).

The most energy-intense and carbon-intense step of aluminum production is the smelting of alumina to aluminum.

This occurs via electrolysis: a hugely energy intensive process, taking some 15.37 MWh of electricity per tonne of aluminum. This is roughly 5 times the annual energy use of a UK household.

Because they use so much electricity, the majority of smelters are situated where electricity can be produced very cheaply. This produces a significant variation in emissions intensity between smelters. Hydro power (which is low carbon) and coal power (very high carbon) are the two electricity generation technologies that have been cheap enough (historically) to make aluminum production economically viable. 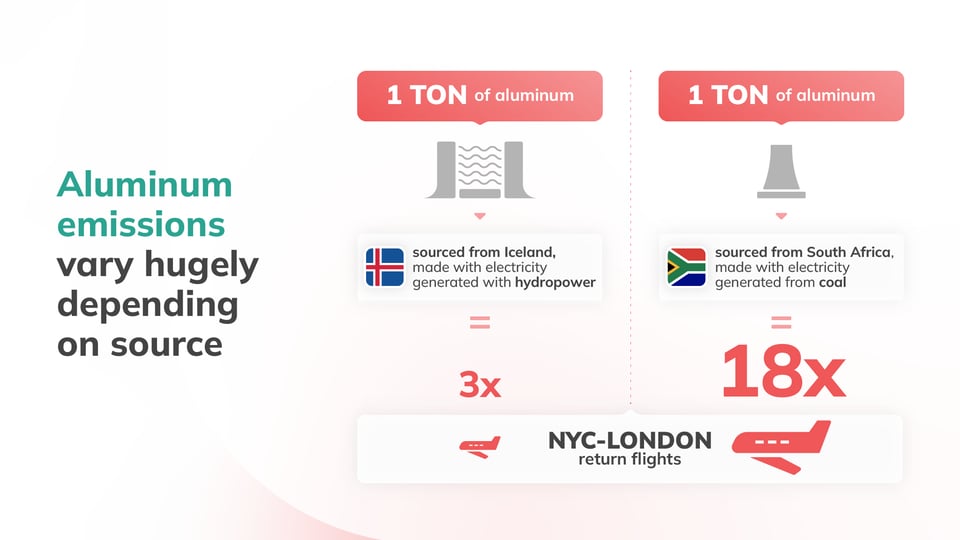 As well as these emissions produced by purchased electricity (Scope 2 emissions), aluminum smelting also results in direct emissions (Scope 1). Electrolysis uses a carbon anode to provide the reduction agent, liberating the oxygen ions from the aluminum oxide compound to yield pure Al at the cathode. This results in the creation of CO2 at the anode, resulting in a significant source of emissions. 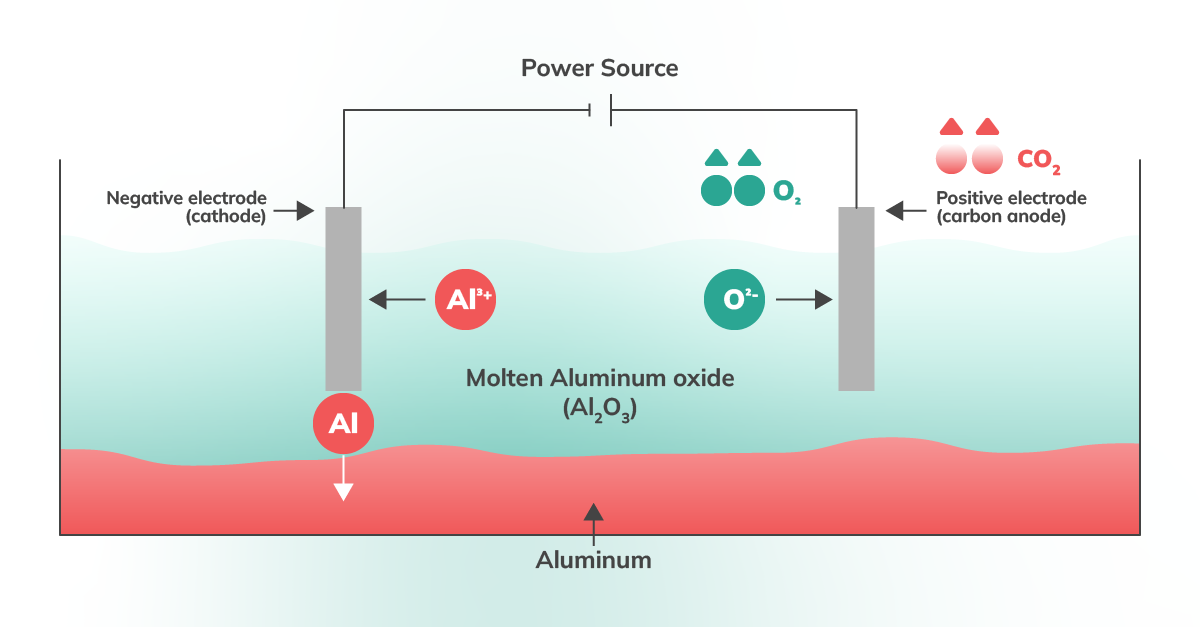 Who makes the greenest and dirtiest aluminum?


For the reasons mentioned above, the most important factor in aluminum's emission intensity is the electricity generation technology.

This varies widely by geography. In North America, Europe, and Russia, aluminum is typically made with hydro power, and is thus relatively low in emissions.

Conversely, aluminum from China and India uses electricity from coal power. The aluminum that results is extremely carbon intense, reaching up to 20tCO2/tonne. This is roughly twice the annual carbon footprint of somebody living in the UK — for a single tonne of aluminum. 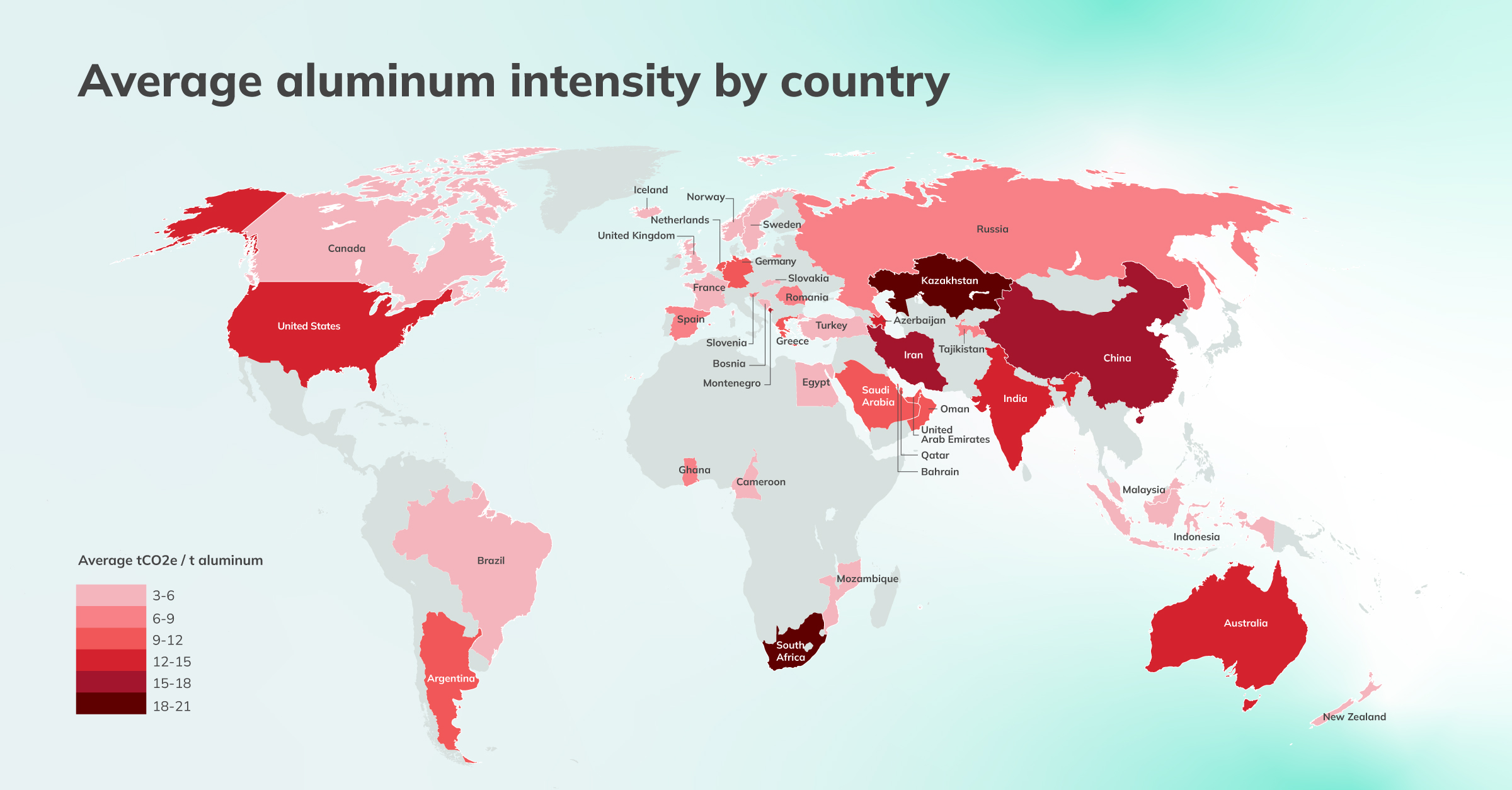 Source: CarbonChain analysis.
Countries not colour-coded have little to no aluminum production.

How are producers reducing carbon intensity?

Because electrolysis is so carbon intense, switching the source of electricity generation is the most effective step a producer can take.

In practice, this is difficult to achieve, because regions which currently rely on coal power typically do not have easy access to large amounts of renewable electricity. However, in some countries (for example, India), solar power is now the cheapest source of electricity, opening up a path for some of the world's dirtiest aluminum to become some of the world's cleanest.

Additionally, aluminum smelters may be able to act as virtual batteries, soaking up power from the grid when it's abundant and dialling back their power use when the sun isn't shining.

Before carbon anodes can be used in aluminum production, they need to be baked in a furnace. Baking anodes on site is done with the Søderberg process, which is relatively inefficient. Several producers have moved to ‘prebaking’ their anodes outside the cell at another location. This offers a modest reduction in carbon intensity.

Others are using inert (rather than carbon) anodes to reduce emissions.


More and more companies are seeking low-carbon products and asking suppliers to disclose the emissions in their supply chains.

Understanding the emissions of the aluminum you're buying or funding is important for tackling carbon risk, preparing for regulation like the EU CBAM and meeting stakeholder demand. With the huge variation in emissions among aluminum products, estimating emissions using broad-based methods can hide your most important carbon hotspots.

If you need help measuring your aluminum emissions, get in touch today. 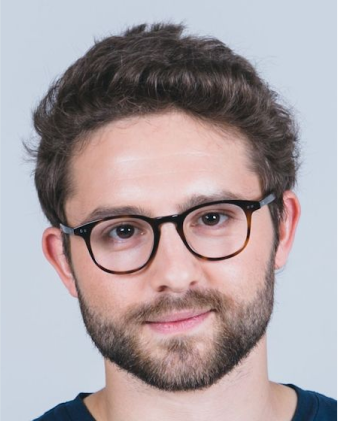 Good offsets, bad offsets: A guide for the commodities sector 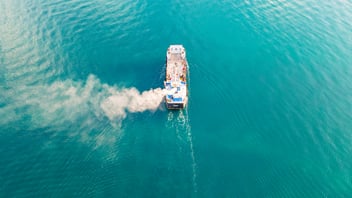